Almost two weeks have passed since Talent Summit, yet the excitement from the event is still very much alive. I met with Talent Summit Founder, Robert Mac Giolla Phádraig to ask him to share some of his key takeaways and highlights from Talent Summit 2019.

After being asked for his top five takeaways, without even a moment to reflect, Robert started with “Kate Costello’s speech was a particularly significant take away”. Kate, who is only 16, spoke at Talent Summit to present the Dermot Costello Outstanding Leadership Award in honour of her father to the Irish women’s hockey team who reached the World Cup finals for the first time ever last summer. 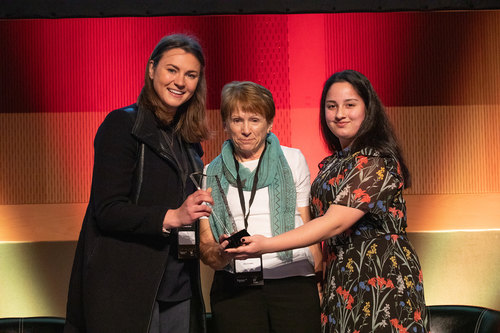 In her speech Kate told the story of a mouse who wanted to look bigger and stronger than those he feared so they would fear him. He asked a wizard to change him from a mouse to a cat, then a cat to a dog and then a dog to a lion. After some time, the wizard said, “with the heart of a mouse there is nothing I can do for you”. It’s a powerful statement to those in leadership. Being a leader means being brave in your actions to lead and guide others. You need to be courageousness to lead beyond the odds, have the heart of a lion even if sometimes we feel like a mouse. 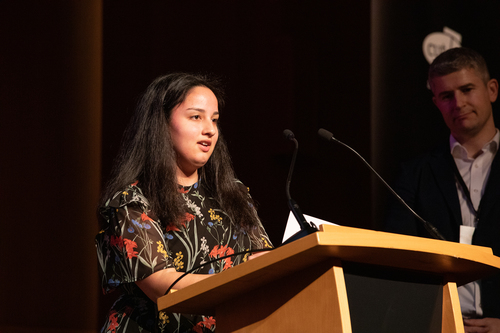 Robert reflected on the parallel message in Kate’s story of how we can leave a lasting impression on those close to us, shaping and activating change beyond what we expect and, in many cases, never even knowing we’ve impacted on a person.  “The fact that Kate stood on the stage, eloquently recounting a story her father once told her, shows the personal impact we can have on those around us, can be truly transformative, beyond what we intend it to be. The irony here is that Kate not only showed the “heart of a lion” as she presented the award to her own heroes, but she herself was demonstrating outstanding leadership through her actions. My takeaway from this is that we inspire and activate those around us, every day in most cases without even realising it.”

“Last year, I recalled how spending time with Dermot, was often like a life lesson, as you would come away with a different twist on whatever topic we discussed. It’s clear that the apple didn’t fall far from the tree… Thanks for that lesson Kate!”

The NASA transformation story shows very clearly how purpose is our defining competitive advantage. Robert reflected on Robert Gibbs keynote which explained how NASA’s raison d'être boils down to the flourishment of human kind which allows them to operate on the fringe of what is commercially viable, giving them the ultimate competitive advantage. “Robert Gibbs also reminded us that change is a ‘contact sport’, it’s personal, constant and unpredictable, requiring continuous communication and feedback”. 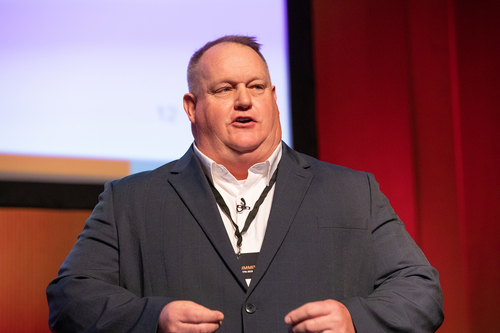 When Robert later spoke on a panel with Niamh O’Beirne, Partner, EY and Barry Rudden, Director, Sigmar Recruitment, what surfaced in the conversation was the power of presuming positive intent. Belief goes a long way and sometimes to get the best out of people you need to believe in them. 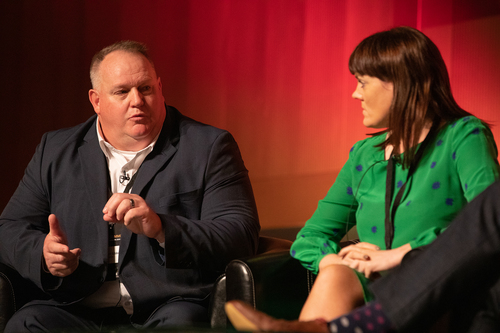 During Margaret Heffernan’s keynote she emphasized how building social capital takes time, focus and energy and if the ingredients are right, can bind human capital to achieve beyond measure. The strength of the social capital creates the foundation for companies to succeed, the components of which are uniquely human; kindness, helpfulness, warmth and candour. 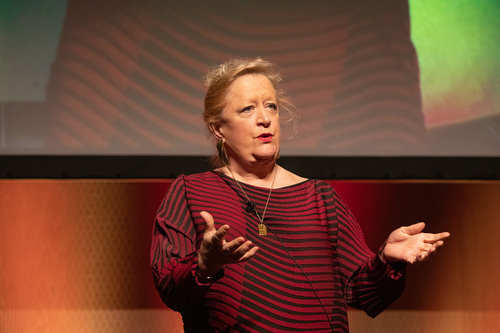 Robert went on to say “The thing that struck me is how the ubiquity of loyalty, friendship and comradery in the workplace create a shared commitment to success, something we may struggle to replicate in the gig economy. In short being trusting and trustworthy is the basis of creating a just culture”.

Given that Talent Summit is a humanic conference, Ian argued that conversation is where the rubber hits the road in expressing our humanity. It reminds us that how we make people feel in our presence is the true measure of our engagement. 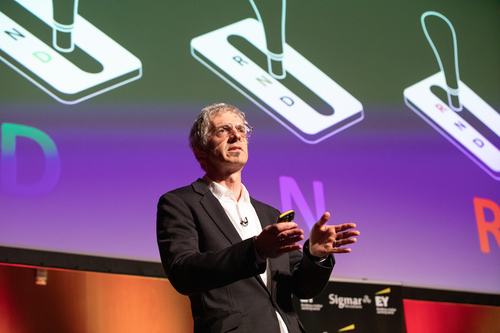 Monica Lewinsky - The Importance of Being an Upstander

Robert quoted a Mexican proverb when introducing Monica, which in mays ways captured the spirit of her story; “they tried to bury us, but they didn’t realise we were seeds”.

Monica Lewinsky’s story, in many ways reflects this juxtaposition of humanity and technology. As the internet catapulted her into the limelight bringing the uninvited attention of the world upon her, it was the compassion of those around her, coupled with personal resilience that brought her back from the brink. Reflecting the theme of this year’s Talent Summit, it’s the human element that has enabled Monica to lead change through her social activism and create a global anti-cyberbullying revolution. 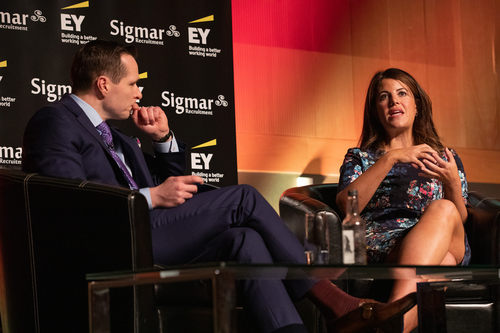 “Monica has turned personal trauma into grace and raised a profusion of lessons we can apply in our personal lives, working worlds and within our family units. My main takeaway from spending time with Monica is that each of us can make a difference by showing compassion through our actions, by being an "up-stander". Monica spoke about this in the context of societal change, but the glaringly obvious parallel in our working world, is that as some resist change and others passively act as bystanders, we truly need to firmly stand “for” the purpose behind the change we hope to achieve.”

Mirroring Margaret’s Heffernan’s comment on workplace loneliness and Kate’s story of the need for the heart of a lion, when we sometimes feel like a mouse, Monica harpooned the message of individual impact home when she said, “there is power in small numbers when there is consistency over time.”

We need to create a narrative steeped in empathy to be truly compassionate in all aspects of our lives.

“Our purpose at Talent Summit is to create better working lives as the world of work augments and being more compassionate is really what it all boils down to! "Tanx" for sharing such a powerful message Monica.” 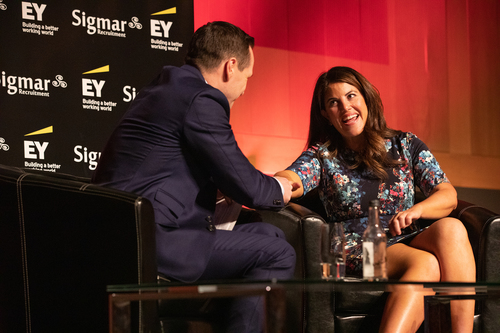 …..and tanx to all who supported, spoke, attended and participated at Talent Summit 2019. See you next year!

Getting paid what you're worth? Check out our  2021 Salary Guide

Sigmar are delighted to be shortlisted for two awards at this year's Talint International Recruitment Awards which will take place in October 2020.   Our team are finalists in the awards for: "Best Client Service", which recognises excellence and collaboration in the delivery of talent acquisition project or ongoing campaign; and "Best Recruitment Agency To Work For in Ireland and the UK" (£20-50m turnover), which recognises employers of choice in recruitment who can demonstrate innovation and impact in their attraction, induction, development and retention of talent.    Sigmar were last year announced as the winner of "Best Recruitment Company to Work For in Ireland and the UK" so are looking forward to defending the title.   Due to ongoing social distancing, TALiNT Partners will deliver the TIARA Recruitment Agency Awards Ceremony as a virtual event on Wednesday 21st October. See the full list of finalists

Sigmar Recruitment today announces the impact of its, not for profit, COVID Response Jobs initiative three months after its launch. The online platform was set up as the COVID crisis took hold, and subsequently saw six hundred thousand people lose their jobs. It was set up to connect jobseekers with frontline jobs, offer career advisory services as well as free up-skilling opportunities for the restricted workforce, ultimately to support a more robust and effective recovery.   The initiative has since seen: 83,716 jobseekers’ availed of career advisory services ranging from; video interviewing, remote working, digital collaboration, social branding, job hunting in the low-touch economy to traditional advice on interview preparation, and CV content. 10,702 availed of free online upskilling, through learning partner Alison.com. Most common courses completed were in Project Management and MS Excel. 3,010 jobseekers connected with over 200 frontline employers across retail & grocery, catering, healthcare, supply chain, production, security, and warehousing. 900+ jobs advertised over the period. 15,050 jobseekers subscribed on weekly basis for employment insights.   Commenting on the initial results, founder of the initiative and Sigmar CCO Robert Mac Giolla Phádraig said;  “ We’ve been overwhelmed by the level of engagement amongst jobseekers coming to the site, particularly the quantum availing of the career advisory services, which have been tailor-made to support the remote job search in the current environment. Recruitment has changed significantly in recent months and how jobseekers compete is now very different from what it was. Our career advisory service has helped jobseekers articulate competencies and achievements through a digital recruitment process for a lower touch economy.”   “In addition, we are delighted to have supported over 200 frontline employers in a meaningful way and in turn help keep the national infrastructure up and running.”   Commenting on the take up of upskilling, Mac Giolla Phádraig added; “We had 10,702 people take up free learning pathways through our partner Alison.com, in subjects such as Project Management, MS Excel, Web development, Data Science, GDPR, Accounting and many more. In addition to skills training, the learning content has been COVID curated for maximum impact across Business Skills, IT Skills, Mental Health, and Personal Development.    Thanking partners of the initiative, Mac Giolla Phádraig commented; “When times were at their worst, our partners were at their best. It’s humbling to see how our combined efforts, can touch so many at a time of need and to see the effect of Team Ireland in action.”   www.covidresponsejobs.com was created by Sigmar Recruitment, supported by Candidate Manager, Alison.com, The Irish Times, Communicorp and Virgin Media

Sigmar Recruitment has today announced the appointment of Mike McDonagh as a Director of the company, as it gears operations towards supporting clients as markets recover. The appointment signals Sigmar’s ambition to build additional capacity as it continues to grow market share. Sigmar has fared better than most recruiters in the Irish market during the COVID crisis and has been at the forefront of industry response, launching https://www.covidresponsejobs.com/; an initiative to mobilise Ireland’s workforce and up-skill the restricted workforce for a more effective recovery. The appointment comes at a time when industry peers continue to retrench and signals Sigmar’s intention to continue to grow market share as green shoots appear.   Mike is a highly respected industry leader with a significant pedigree in scaling successful recruitment businesses both in the UK and in Ireland. Most recently, Mike oversaw the growth of Hays Ireland as its Managing Director and previously served as Chairperson of Boardmatch, Ireland’s national corporate governance charity. Mike will join the leadership team to accelerate the growth of the core Irish business in delivering world class recruitment solutions and supporting international diversification.   Welcoming Mike’s appointment, Adrian McGennis, CEO, Sigmar Recruitment said: “We are delighted with the appointment of Mike to the senior leadership team here at Sigmar. He has fitted in with the team and culture very smoothly. We knew Mike’s reputation, ambition and experience but our shared values make it an exciting appointment for everyone. It is consistent with our growth plans and whilst many are downsizing, we are delighted to continue to make key hires. Ten years ago, we saw the opportunity in a challenging/changing market to grow the business and because of our strong position and talented team, we see similar opportunities now.”   Mike McDonagh commented; “I’m delighted to have joined such a successful organisation as Sigmar, a business I have admired for years for their excellent culture and values.  Joining such a brilliant leadership team is a real honour and I’m very excited about helping the whole business realise the considerable opportunities in the market.”