A delegation of Irish business leaders has today arrived in Washington from Dublin with the clear message that Ireland’s trade partnership with the US is stronger than ever, and that Ireland is the location of choice for FDI in Europe.

Ireland Gateway to Europe will meet with their US counterparts and political representatives tomorrow, Wednesday April 11, 2018 on Capitol Hill to strengthen existing business relationships and create new ones.

Ireland Gateway to Europe (IGTE) is a not-for-profit annual trade mission made up of professional advisory firms who travel the US annually to provide a secure resource network for business expansion to help US investment succeed in setting up operations in Ireland.

Founded in 2012 as a response to the economic challenges at that time of global recession, Ireland Gateway to Europe is now in its seventh year of US, UK and global trade missions. 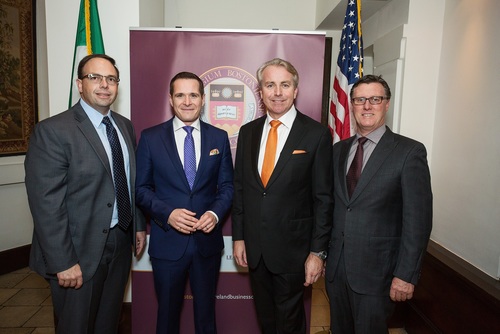 Says Robert Mac Giolla Phádraig of IGTE leadership team: “Ireland has traditionally enjoyed a particularly strong business, cultural and political relationship with the US. However, in light of the recent announcements of trade tariffs, data privacy, immigration and other protectionist policies, our concern is that there may be a perception that Irish-US trade linkages may have subsequently diminished. The fact of the matter is that the transatlantic economy grew stronger, not weaker over the past year, as did Irish -US trade with US exports to Ireland up 9% and imports to Ireland up 6%.

“The purpose of our mission is to let US business leaders and policy makers know that not only is Ireland a particularly attractive European proposition right now in light of what is happening with the UK exiting the EU, but that Irish investment in the US is growing year on year.

“Our message to Capitol Hill is very clear; Irish-US trade continues to grow with equanimity and therefore Ireland remains one of the best countries in the world in which to do business.”

The Washington mission is the focal point of the 2018 trade mission, which also sees the group travel to Boston to engage directly with the US business community at the launch of the transatlantic Boston College Ireland Business Council (BCIBC).

Having launched in Ireland last October, the US BCIBC launch will take the form of a Global Leadership Symposium where US business leaders and politicians will meet with their Irish counterparts. The theme of the event is Global Leadership, where a panel of global CEOs will discuss how they, as a transatlantic leadership community, can create opportunities against the backdrop of economic challenges.

The Global Leadership Symposium is one of a series of planned BCIBC CEO Exchange events that will take place twice annually over the coming years, both in Ireland and in the US.

Founded by the Global Leadership Institute, Boston College, and Ireland, Gateway to Europe, and Chaired by Neil Naughton of GlenDimplex, the main aim of the BCIBC is to bring influential business leaders from both communities together once a year in Dublin and in Boston to create one deeply connected transatlantic trade artery.

Says Mac Giolla Phádraig: “By establishing the BCICB, the tight commercial and social bonds we share with the US can be strengthened and build upon bilaterally, business to business, in spite of any potential external or internal protectionist political policies. It’s widely known that cultural ties between Massachusetts and Ireland are deep but possibly lesser known are the strength of economic ties with 11,000 people employed by Irish companies there and Ireland being the 6th largest exporter from MA.

“The BCIBC community of transatlantic business leaders have a collective, critical role to play to ensure the future foundation of business relations is maintained for generations to come.”

Neil Naughton, Chair GlenDimplex says: “We established the Boston College Ireland Business Council (BCIBC) to cultivate, nurture and encourage business relationships between Ireland and our Bostonian brothers after the success of Aer Lingus American College Football Classic, held in Dublin in 2016. After welcoming 25,000 visitors, many relationships, both business and social, were formed. Our overall objective in establishing BCIBC was to create a continuous network to allow for business relationships to blossom and in turn create opportunity for the people of Ireland and Boston.”

Getting paid what you're worth? Check out our  2022 Salary Guide

We're delighted to announce that Sigmar CFO, Dervla Owens is on the ​Staffing Industry Analysts (SIA) 2022 list of the Global Power 150 – Women in Staffing. In its eighth year, this annual list recognizes women for their outstanding efforts and achievements in elevating the workforce solutions ecosystem.​​Sigmar CEO Adie McGennis comments: "We are all delighted that Dervla is rightly included in this prestigious list. It is great that the global industry recognises the huge contribution that Dervla makes to Sigmar, the industry and business in Ireland. Always 100% professional and willing to support, many of her initiatives have driven growth in our Temp business, as well as supporting the development of Sigmar for last eleven years. Congrats Dervla!"​“These forward-thinking women have turned challenges into springboards to success. From heading up impactful organizations to steering essential projects to fine-tuning the hybrid model, they have led with grace and empathy,” said Subadhra Sriram, SIA’s editor and publisher, media products. “Congratulations to this year’s honorees who are navigating, adapting and innovating in this new world of work. The remarkable women gracing our 2022 Global Power 150 list exemplify strength and leadership in the staffing industry.”​SIA’s research consistently shows that despite women dominating offices worldwide in the staffing industry, only a few women make it to the top roles in organizations. The Global Power 150 – Women in Staffing shines the spotlight on female leaders making a difference inside and outside of boardrooms. ​The 2022 Global Power 150 – Women in Staffing debuted today with profiles highlighting each honoree now available online here.

​Following on from 10 of our staff raising €42,775 on the Paris2Nice cycle, over 40 of us descended on Saplings Special School, Kilkenny to take part in our first-ever Difference Day, to put the money raised into action. Our goal was to help transform the outdoor areas of the school to enhance the environment for the children and teachers of the school. A total of 5 projects were carried out on the day including building 2 outdoor classroom spaces, new seating and planters, painting the playground area and constructing a fence to make the front area of the school safe for the kids.There was lots of hard work but the fantastic principal Sandra, her staff and the wonderful pupils of Saplings kept spirits high throughout the day. It was extremely rewarding when the team were able to reveal the completed projects to some of the teachers, parents and pupils at the end of the day. Their reaction made all the manual labour worth it!A huge thank you to Difference Daysand Outdoor and Spaceswho helped us bring this project to life! It was an absolute privilege to be able to undertake it.​

Ireland Gateway To Europe in London

Ireland Gateway To Europe in London

​Sigmar led a delegation of 50 Irish and US business leaders to London last week for trade missionIreland Gateway To Europe, to promote US/UK/European trade. We hosted a number of events in the London over two days welcoming over 300 guests.We were joined by the team from The Hard Shoulder on Newstalk, who  broadcast live from our trip.Boston College Global Leadership Dinner - RAF Club (19th Oct  2022)Sigmar CCO Robert Mac Giolla Phadraig was MC at the The Boston College Ireland Business Council Global Leadership Dinner which took place in The RAF Club in London. There were fascinating conversations with:Dame Sharon White, Chairman John Lewis & Partners;Conor McEnroy, Founder and owner Sudameris in Paraguay; Warren Zola,Executive Director, BC Chief Executives Club.The event was kindly hosted by Rosaleen Blair, CBE.Listen to Robert MacGiolla Phádraig, Conor McEnroy, and Neil Naughton The Hard Shoulder on NewstalkBoston College CEO Club Lunch at Bloomberg (Oct 20th 2022)There was a full house for the first BC CEO Club lunch ever held in the UK, hosted at the amazing offices of Bloomberg. Guests from London, Ireland, the US and a number of Boston College alumni attended to hear about global economic trends and Europe's energy crisis from our speakers:Fernando Vicario, CEO, Bank of America EuropeRobert Mac Giolla Phadraig, CCO, Sigmar RecruitmentSonya Twohig, Secretary-General of ENTSO-EGerard Reid, Co-founder, Alexa Capital Warren Zola, Chief Executive, Boston College Chief Executives Club.​The London Irish Centre (Oct 20th)The delegation visited the London Irish Center, an established charity offering advice, support, culture and community services to the Irish in London from our centre in Camden. It was absolutely amazing the scope of what they do and the difference they make.​Listen to Séamus MacCormaic, CEO of the London Irish Centre on The Hard Shoulder on NewstalkReception at The Embassy of Ireland, London (Oct 20th)We were delighted to end our trip as guests of Ambassador Martin Fraser at the Irish embassy in London.​

Sigmar Recruitment were proud to lead Ireland Gateway To Europe, the largest ever private sector trade mission with over 70 Irish business leaders to Chicago and Boston, joined by former Taoiseach Bertie Ahern, from April 5-9th 2022.View Week in Review PDFThe Sigmar and Groupe Adéquat Team at Ireland Gateway To Europe 2022CHICAGOThe delegation visited Northwestern University for a tour of the Athletics department before lunch with Coach Fitzgerald and his team, in advance of the Aer Lingus College Football Classic taking place in Dublin this August.The group then attended a special session where Dean of Kellogg School of Management, Francesca Cornelli, interviewed former Taoiseach Bertie Ahern about his role in the peace process.BOSTONThe group headed to Boston the next day firstly attedning the Boston College Ireland Business Council (BCIBC) Dinner. We were delighted to welcome, one of Ireland's most respected global entrepreneurs, Rosaleen Blair, CBE to the board of the BCIBC where she was joined in conversation with CEO of Globalization Partners Bob Cahill and CEO of DraftKings Inc. Jason Robins on Today's Leadership for Tomorrow's Work at the BC Club. The event was moderated by Sigmar CCO, Robert MacGiolla Phádriag.The next morning, Drift kindly hosted the Transatlantic Tech Leader Breakfast where we were joined by one of Irelands most exciting tech leaders, founder of Woebot Health, Alison Darcy and CEO & Founder Compt, Amy Spurling along with Boston City's tech leaders, moderated by Sigmar CCO, Robert MacGiolla Phádriag.Sigmar CEO Adie McGennis (above), Sigmar Director Mike McDonagh (below)At lunchtime, Silicon Valley Bank, kindly hosted the joint BCIBC & Boston College CEO Club Lunch with two pioneers of the future of work, Eric Mosley, CEO of Irish unicorn Workhuman in conversation with Rosaleen Blair, CBE, before the group attended private event hosted by Edward M. Kennedy Institute for the United States Senate.A huge thank you to our delegates, members of Ireland Gateway To Europe, hosts, partners Newstalk, Business Post and sponsors on both sides of the Atlantic.Listen to all of Newstalk's coverage of our trip